Busting the myth that road narrowing schemes are good for cyclists

Roads in London get worn out.  With thousands of buses, cars, taxis, bicycles and people on foot churning up and down day in and day out, and with the city's services running underneath it is no surprise that London's major roads get upgraded - "refreshed" - on a fairly regular basis. (And anyone who rides a bike along Bishopsgate in the City will agree how necessary these upgrades can become!)  Road planning theory tends to follow trends; thirty years ago it was for building pedestrian subways and installing guard rails.  A few years ago the trend was for ripping those guard rails out again.  Nowadays, the big design idea that is currently en vogue is "road narrowing" - especially on major A roads in the city centre - and that's a problem for us cyclists.

The thinking goes that by narrowing the carriageway more space is provided for pedestrians, and speeds of motorised traffic are slowed because of the proximity of oncoming traffic.  When roads are especially narrow then drivers have to "negotiate" and gingerly interact with one another.  Meanwhile, long, wide paved central reservations give pedestrians refuge when crossing the street and encourage "crisscrossability" or casual road crossing.  The theory is great, and it is certainly an improvement that road planners are not just thinking about providing for motorcars, but the reality of the subjective experience of cycling on narrowed roads is extremely concerning indeed.

If you're a regular cyclist in central London, chances are you will know that cycling on Oxford Street, Piccadilly, or the Strand is an experience to be avoided - especially at peak times.  These are all very pedestrian-heavy areas which have been refreshed in recent years with road narrowing schemes. 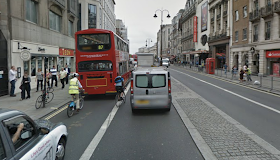 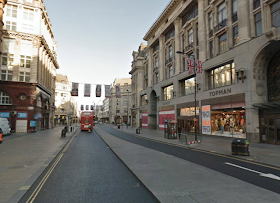 The Strand and Oxford Street - no room for cyclists. (Pictures copyright 2013 Google, with thanks)

The theory goes that cyclists will naturally "take the lane" on narrowed roads, becoming a natural part of the traffic order, and everyone will progress forwards at the same time.  But it seems to me that all these designs have done is create a new kind of road where there is no room left for cycling.  To me, this is clearly concerning for a number of very obvious reasons:

In the first instance, not many people actually feel comfortable "taking the lane".  This kind of thinking is a cultural hangover from the influence of vehicular cycling campaigning; the ridiculous idea that bikes should act as motorised traffic and not be afraid to claim their place in the road.  Of course the reality is that most people do not enjoy taking the lane (myself included), most drivers do not understand why people on bikes are behaving in such a way, and the subjective experience of having to act like a rolling speed hump is extremely uncomfortable.  At the end of the day, when you're just trying to get home safely no one likes having a bus, a truck or an ireful taxi driver revving their engine inches from your rear wheel and with nowhere for them to pass you safely.  The hierarchy of provision - the DfT's sliding scale, supported by our national cycling campaign, which suggests what you should do for cyclists - says that the first practical thing that can be done that can help cyclists is to lower the speed of other traffic.  Planners and engineers see this suggestion, dream up their road-narrowing, traffic-slowing schemes and tick the "Cyclists" box on their road user charts.  Meanwhile, down on the ground, conditions become much worse for those of us on bikes.

In the second instance, bicycles are unique in that they are usually slower than moving traffic  - which creates the problem as described above - but able to move faster than stationary traffic, which is a key benefit of riding a bike.  Being able to sail past rows of cars to get to the head of the lights is one of the key reasons why bikes have such a competitive edge in cities.  On a narrowed street there's either no room to filter at all - leaving cyclists sat sucking on the tailpipes of idling buses, or it leaves a very small gap.  This small gap leads to two types of cycling behaviour we should not be encouraging by design;  it either leads to cyclists hopping on to the pavement and scorching a path past startled pedestrians, or it leads to cyclists squeezing down impossibly tight gaps in a bid to get to the front of the traffic.  If the lights ahead change and the traffic jam starts to move, then people on bikes who have chosen to squeeze down the gap find themselves very, very close to heavy moving traffic with no room to escape.  This is exactly what happened in Bethnal Green last October when young talented dancer and London cyclist Sofokles Kostoulas was crushed between a parked car, a construction lorry and a road narrowing pedestrian build-out on the eastern end of Bethnal Green Road.  Sofokles was taken to the Royal London Hospital but died of his horrific injuries some days later.

Next week, on the western end of the Bethnal Green Road, a new road narrowing scheme will open where previously there was room for vehicles to overtake cyclists, via a wide painted median strip.  This road is an A road; busy with private motor cars heading to and from outer eastern London and Essex, as well as a key bus and coach route.  It's also extremely popular with people on bikes, as well as the "town centre" of the local area with many busy shops, restaurants and bars.  In a heavily congested - and heavily contested - space, it seems to be that people on bikes are the ones who are missing out.  An existing road narrowing scheme here by Brick Lane has been commercially successful; regenerating a number of businesses and filling empty shops by increasing footfall by pedestrians.  It's helped to make the place nicer too, creating space for trees, benches and bike stands. 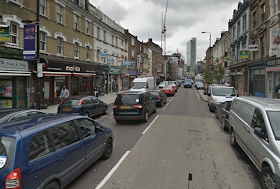 But this is now a horrible place to ride a bike.  And this is still an A-road; it is still full of heavy traffic only now there is less room with which to deal with it.  Even the most attentive of drivers and cyclists are capable of making a mistake, and I'd like to think the design of our roads have enough slack in them in order to be forgiving of human error, especially when it is human life that is at stake.

Plans currently being built on the Bethnal Green Road - the green squiqqly line represents a separated cycle path.   It has - thankfully - been built straight, but it is still not good enough. (Click image to enlarge)

The extension eastwards of the Bethnal Green Road narrowing scheme, towards Valance Road, will open next week with beautification elements (trees, benches etc) to follow early in the new financial year.  A carriageway which was once very wide will no longer be so.  Interestingly, the planners and designers here have tried to do right by the bicycle; they're installing some separated cycle paths that run along the inside of parked cars.

The Bethnal Green Road site as it was until very recently - loads of room for everyone, pedestrians included!

But there simply isn't room enough for wider pavements, two separated cycle lanes, two lanes of traffic and two rows of parking.  The cycle tracks being built are woefully inadequate; narrow, within the dooring zone of the parked cars, and ridiculously short before they spit you back in to the road from behind some parking.  (They were also, in the original plans, quite fantastically weavey, though having inspected the site yesterday it seams the engineers have at least been able to roll them out in a straight line, contrary to the initial designs.)   If roads are going to be narrowed by creating cycle tracks then that's fantastic, but as every campaigner will tell you cycle tracks need to be wide, continuous and safe.  As it stands the new tracks that have been built on Bethnal Green Road are so narrow they will not be able to accommodate existing levels of cycle traffic, and will only serve to create antagonism between cyclists and drivers when cyclists (rightfully, I think) choose to stick to the main carriageway.  This was all pointed out to the lead engineers at Tower Hamlets by the local arm of the London Cycling Campaign.  On realising how poor their designs were, the engineers have decided not to paint the new cycle tracks or mark them explicitly as being such.  They're describing this as "an experiment".  I'm calling it out as an expensive fudge, and a dangerous one at that.

The irony here is that before all this money was spent, there was plenty of room here for everyone already - including pedestrians - unlike in some other sites where road narrowing has been used.  What exactly was the point?  More dangerous conditions for cyclists in return for a few extra trees and some pretty paving?  Do we really have our priorities right here, and elsewhere across London where such schemes are prevalent?

With such heavy use it is inevitable that roads in London are being refreshed all the time, and whilst our attention is so often diverted by cycle-specific schemes like the Cycle Superhighways, everyday road re-shaping going on across the city could in fact be making things worse for people on bikes.  Cyclists and campaigners need to be on their guard, whilst engineers, traffic planners and street-makers need to appraise their work with a more critical eye and avoid just doing what seems to be in fashion and thinking themselves radical for it.  The health of London's cycling culture, and the safety of London's cyclists, could be at stake.

On major roads with heavy traffic, road narrowing is dangerous and disastrous for cyclists - it is time we moved on from this ridiculous trend.

For more analysis of the problem with road narrowing, looking especially at what used to be the busiest road for cyclists in the City of London (Cheapside) do read this excellent post from Cyclists in the City published over the weekend.

Discourse is good - just keep it civil, and if you are going to post Anonymously please sign off your post with a name to avoid confusion.